Not Your Ordinary S’Mores — Creative Ways to Enjoy a Campfire Classic!

Another long weekend is upon us! Instead of doing a traditional menu we’ve shared in the past, we decided to focus this week’s blog on a campfire must-have, s’mores!

The original meaning of Labour Day is now generally overlooked. It is now seen as the closing of the summer, and return back to school for kids. Often, families take this opportunity to have one last weekend away at the cottage or renting a campsite to commemorate the season’s end.

There’s nothing more reminiscent of the end of summer than sharing a campfire with your family while roasting marshmallows to make a classic s’more! The original name of the s’more recipe was actually ‘Some More’ and not quite known when it was shortened to this abbreviation. However, the origin of the ‘Some More’ goes way back to 1927. The term was coined by a Girl Scout troop leader, Loretta Scott Crew. It was included in their Girl Scout Guide for Tramping and Trailing. The tradition of making s’mores by the fire is a great way to spend this final summer weekend with your loved ones.

We thought we’d amp up your usual s’mores recipes and give you some ideas! Whether you’re spending the weekend cottaging, camping or even just sticking around home!

S’Mores can be a healtier snack too! Here’s how you can make them better

While we all love a good ole original s’more with the traditional graham cracker, chocolate and marshmallow combo, we thought we’d kick it up a notch. We put together an assortment of s’mores made using alternative ingredients that you may never have thought to use. You will assemble it on a charcuterie board, so it’s easy to serve no matter what campfire you are near!

Obviously, you still need the basics:

We opted to use a gluten-free graham cracker by Kinnikinnick, called Smoreables. You can find them at all of our locations. Not gluten-free? No problem! You can sub-in regular graham crackers. But if you have family members or visitors who have issues with gluten, these are a great replacement!

It wouldn’t be a s’more without the gooeyness of marshmallows. Still, unfortunately, most conventional marshmallows are made primarily of corn syrup and other corn by-products. Corn is one of the most genetically modified crops at this time! It may be beneficial to avoid the consumption of these options. Instead, substitute them with a healthier alternative, like Dandies Marshmallows (made mostly from tapioca). Dandies are also vegan, made without gelatin, which is an added bonus for those of you who are vegetarians or vegans!

For the chocolate, we’ve opted to include a few different options. The first is a more traditional milk chocolate bar by Lily’s. The benefit to Lily’s is it’s sweetened with stevia. For those of you watching your sugar intake, you can reduce the amount of sugar in a s’more by using this type of chocolate instead. We’ve also included less traditional varieties of vegan white chocolate and a matcha chocolate bar! Don’t be afraid to try these. 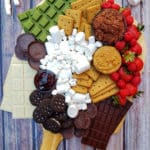 This s’mores Charcuterie Board is sure to kick them up a notch and impress your family and guests! The ingredient amounts are not included so you may adjust this board to your liking.
Course Appetizer, Snack
Prep Time 30 minutes
Total Time 30 minutes
Servings 10 servings
Author Sabrina Cellupica & Nicole Ensoll

Our friends at Leo & Co Bakery have created these delicious treats that are made of wholesome ingredients like, almonds, cashews, apples, coconut and sweetened with monk fruit to keep the sugar content low. Plus, we’ve opted to use a Lily’s Chocolate Bar, which also is low sugar. Find these decadent beauties at our Juice Bars or in the Bakery department and either enjoy them on their own (especially if you’re keto, paleo or watching your sugar consumption), or combine them with Dandies Marshmallows and drizzled Camino chocolate & crumbled Kinnikinnick Graham Crackers for a different take on S’mores this Labour Day weekend (no campfire needed)! 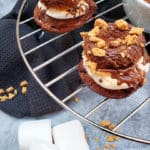 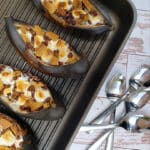 Have you ever had a banana boat? Basically, it’s a banana cut down the center (lengthwise) and filled with chocolate chips, wrapped in tinfoil and baked in the oven until the banana softens and chocolate chips melt!For this recipe, we’ve taken this idea, but combined the banana and chocolate chips, alongside marshmallows and graham crackers to create a delicious alternative to s’mores that everyone will love!Not by a campfire this long weekend? Not to worry, you can bake these in the oven instead so you don’t miss out on these scrumptious sweet treats!
Course Dessert, Snack
Keyword Gluten Free, Vegan
Prep Time 10 minutes
Cook Time 25 minutes
Total Time 35 minutes
Servings 4 boats
Author Sabrina Cellupica & Nicole Ensoll

We also have ready-made cookies, cake and cupcakes available in our stores for you to indulge in! These decadent desserts are made by Sweets From the Earth and are all vegan, peanut and tree-nut free! Pick these up as a sweet treat to yourself this Labour Day if you don’t feel adventurous in making one of the above recipes!

Besides indulging in s’mores-flavoured everything, how do you plan on spending your last long weekend of summer?